Goal of the project: Improving the quality of life and social inclusion of the Roma community in Lesichovo Municipality and ensuring its permanent integration through Systematic integration model – Dinkata.

Specific objective: Supporting the social inclusion of children and students from the Roma community in Lesichovo Municipality by providing them with access to education and trainings.

The objectives of the project contribute to solving the identified needs and problems of the representatives of the target groups in the following ways:

1.Mechanism for the model functioning and management.

2.Extra-curricular activities for children at risk of dropping out of school.

3.Psychological support for children and students from ethnic minorities.

5.Support for students from ethnic minorities in continuing their education at high school. 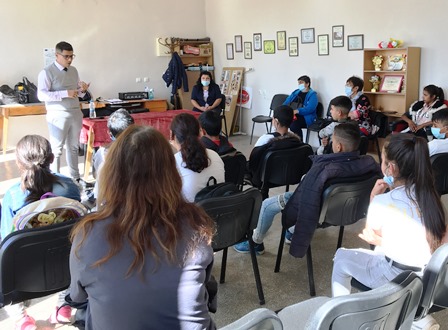 The first meeting was with Kalina Vasileva. She is from Sliven. She has a bachelor’s degree in applied linguistics & English language teaching from New Bulgarian University and a master’s degree in political science from Sofia University St. Kliment Ohridski. She has worked as an executive director at Foundation “Equal access”, program coordinator at Trust for Social Achievement in Sofia, English language teacher, and more. At the moment she manages her own consulting agency for human resources management.

The students got actively engaged during the meetings. The listened to the guests’ stories attentively, asked a lot of questions and even came to the conclusion that the best road to success for a Romani child is good education.

The activity is part of Project “Systematic integration model “Dinkata” for socio-economic and educational integration of vulnerable groups in Lesichovo”, Contract № BG05M9OP001-2.018-0021-2014BG05M2OP001-C01.

Children from Club “Gradina” in Dinkata planted their first trees 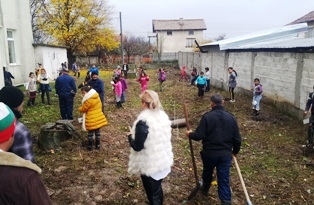 Children from the other clubs also took part in the activity, together with ten professional gardeners who were hired under the project. Before the trees were planted, a meeting was held at the gym between the children, teachers, mediators, other project participants, and the deputy mayor of Lesichovo Municipality, Veselina Milkova.

Despite the rain, the children were enthusiastic, planting the tress in the schoolyard. The Project is funded by Operational Programme “Science and education for smart growth”, co-funded by the European Union through the European structural and investment funds.